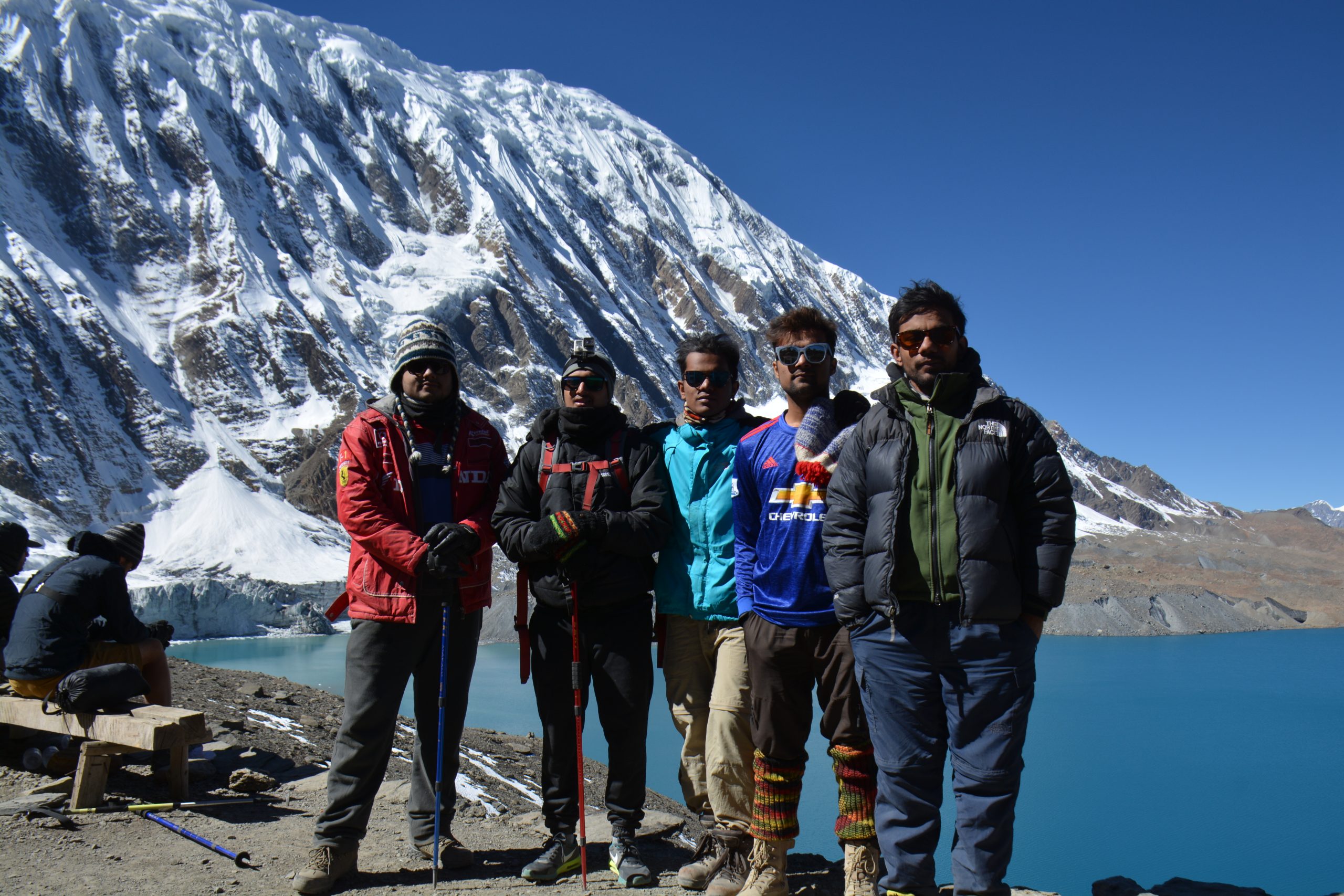 Under clear blue sky, facing snowcapped towering mountains and enjoying the majestic view of the highest lake in the world, Lake Tilicho (4,919 meters) is probably in every trekker’s bucket list. But, I bet you it is not easy and which is why not everyone can do this. After the construction of the road from Besisahar (760 meters) through Chame (2,650 meters) to Manang (3,519 meters) and Khangsar (3,800 meters) recently more and more nature lovers and trekkers are now able to live their dream to see the majestic Lake Tilicho.

“It was very easy for us to go Lake Tilicho and cross Thorong-La pass, and it was the best thing my eyes had ever witnessed. The only regret was, two of our friends could not make it because they got sick at Manang and had to turn back”, my younger brother (Sangam Baniya; an MBA student) shared his experience after his group completed the Annapurna circuit trek on November, 2016. My brother’s group started the trek from Besisahar (760 meters) in a jeep, went to Manang (3,519 meters) in a day and then started the trek next morning. Despite my strong recommendation to avoid the rapid ascent (climbing >500 meters sleeping altitude per day) to high altitude (Manang) on jeep, they did it their way. I had suggested a slower rate of ascent. So, the only help I could offer them as a doctor was to start them on prophylactic Diamox (acetazolamide) one day earlier before they started the trip, told them to watch out for the signs of altitude illness, and get adequately hydrated and pray for good health.

“22,108 foreign tourists and around 8,392 domestic tourists trekked through the trails of Annapurna circuit in 2016”, said Babu Lal Tiruwa UCO officer of Annapurna Conservation Area Project (ACAP) Manang during a press meet at Himalayan Rescue Association (HRA), Kathmandu. “This figure was highest ever in the history of Annapurna region in both categories” he added. “Amongst the domestic trekkers majority were found to be young boys and girls aged 16-30 years and also the majority of them were found to take a jeep or motorbike from Besisahar to Manang or Khangsar”, said one of the lodge owners from Manang. The statistics from the Himalayan Rescue Association aid post in Manang from fall of 2016 has the alarming figures which show that more than half of the altitude sickness patients traveled to Manang by motor vehicle. The study on the rapid ascent using motor vehicle to Manang is under analysis and more results are yet to come. “Number of patients with severe form of altitude illnesses, that is high altitude cerebral edema and high altitude pulmonary edema in Nepali trekkers has dramatically increased in 2016 compared to previous years”, said Mr. Thaneswor Bhandari from HRA aid post in Manang.

With the gain in altitude there is decrease in atmospheric pressure and partial pressure of oxygen. However, the percentage composition of oxygen (21%) in the atmosphere remains the same irrespective of altitude. This state of reduced partial pressure of oxygen in high altitude (>2,500 meters) is known as hypobaric hypoxia. On exposure to the hypobaric hypoxia the human organ-system starts to undergo changes to cope up the reduced oxygen pressure. This is called acclimatization. During acclimatization the rate of breathing increases, heart rate increases and kidneys make more urine. These changes starts as soon as we are exposed to high altitude and it takes days for the human body to fully acclimatize. If we stay for longer duration then human body starts to make more red blood cells.

Acute mountain sickness is common form of altitude illness affecting around 60% of trekkers travelling to high altitude (>2,500 m). The cardinal symptom is headache which is accompanied by nausea, poor appetite, dizziness, fatigue or poor sleep. Depending on the severity of the symptoms it can be mild or moderate-severe AMS.  The end spectrum of the AMS is high altitude cerebral edema (HACE) which means water in the brain. It is signified by the presence of symptoms like confusion, irritability, disorientation, lethargy, drowsiness, ataxia on walking in a straight line along with symptoms of acute mountain sickness. The collection of fluid in the lungs is known as high altitude pulmonary edema (HAPE) and is characterized by non-exertional breathlessness which is more on lying down and at night, cough which is usually dry than frothy and blood mixed, drop in exercise performance, fatigue, chest tightness and sometimes low grade fever. This usually occurs after 3-4 days of ascending to high altitude but it can also occur suddenly in rapid ascent profile.

Mild acute mountain sickness is usually harmless and can be treated by taking extra rest day, using diamox, and plenty of fluids and also pain killers like paracetamol or ibuprofen, may help. But, patients with, moderate-severe form of acute mountain sickness must be brought down to lower altitude and treated otherwise there is a high chance of developing high altitude cerebral edema. High altitude cerebral edema and high altitude pulmonary edema are potentially fatal condition and patients should be immediately evacuated from the high altitude. Descent, descent and descent is the only treatment of these severe forms of altitude illnesses. In situation where planned evacuation is not possible, due to for example bad weather, in the middle of night medical treatment can be done if resources are available. Oxygen using oxygen cylinder or concentrator and Gamow bag which is a portable altitude chamber can be used to buy time until the evacuation is planned.

Importantly, these altitude illnesses are preventable conditions and lives can be saved from potentially fatal conditions like HACE and HAPE if we stick to simple rules. First rule is making the ascent profile “slow and gradual” which means not increasing the sleeping altitude more than 500 meters per day compared to previous night’s sleeping altitude and taking a rest day after ascending 1,000-1,200 meters above 2,500 meters. Reducing the other risk factors like over exertion, dehydration, improper clothing is equally important in prevention. Thirdly, individuals with the past history of altitude sickness can be started in diamox half a tablet (125mg) morning-evening one day prior of trek to reduce the chance of getting altitude sickness.

Sticking to the rule of slow and gradual ascent (this doesn’t mean walking slowly but rather not excessively gaining sleeping altitude compared to previous night as described above), avoiding sudden gain in altitude by motor vehicle and trekking through the trails we can make our trip more memorable, enjoyable and also altitude illness free.

(Note: Revised version of this article was published in “The Himalayan Times” with changed title and contents on Feb 8th 2017.) https://thehimalayantimes.com/opinion/altitude-sickness-dos-donts

No comments to show.